Another round of interns from Capacity London and Capacity Ireland are here in Sicily, completing three-month long internships in a variety of sectors

Split across Barcellona PG and Catania, they have discovered the unique rhythms that govern this Italian island. From their initial culture shock to their gradual adaptation to the Sicilian way of life, we will be exploring what living here is like through the eyes of an intern. First up, Catania!

Culture shock refers to ‘the feeling of disorientation experienced by someone when they are suddenly subjected to an unfamiliar culture’, and our interns certainly have experienced some of this in their first weeks in Catania. Natalia, working as an Art Gallery Assistant at KoArt and Evelyn, who supports the team at FOLK ceramic shop, both describe the road etiquette as being very different!

“The Italian drivers are much crazier than back home. I’m surprised I haven’t been knocked down by a car yet.” 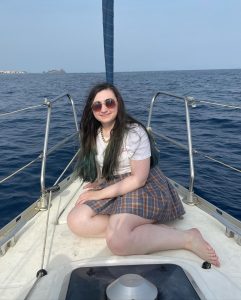 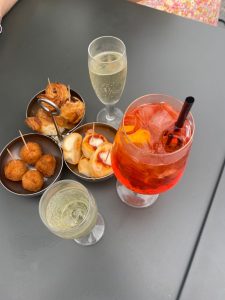 Sofia, who is doing an internship as a Digital Marketing Assistant at FUD comes from a Sicilian family, so hasn’t experienced too much of a culture shock. However, she does think that shop owners seem to be friendlier than in the UK, which is quite a plus for those of us looking to practice our Italian.

Rather ironically, although the roads are chaotic, pedestrians seem to move at their leisure, notes Natalia. The pace of life in Catania is an aspect that the current interns have reported  embracing. The ‘rhythm of the day’ seems much slower, in particular the inclusion of a daily siesta, which was a totally new experience to them.

Trying Sicilian food and drink is a definite hit with our interns. A light, sweet breakfast is the norm in Italy, and Sicily is no exception. Natalia particularly likes the classic ‘colazione estiva’ (summer breakfast) of granita, which is kind of like a slushie.

“One of my top favourite ones is granita – sometimes with and sometimes without brioche. It comes in so many flavours – each one of them is more delicious and refreshing than the previous one.”

She was delighted to find plenty of places offering gluten free options, as she is a coeliac.

The gelato and coffee have also become popular daily additions. Evelyn admits she eats a gelato everyday, and for an after work aperitivo she loves having an Aperol spritz. 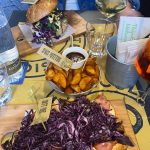 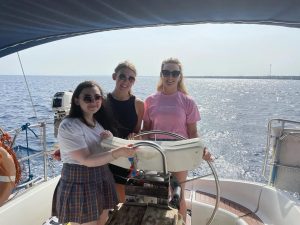 Among the more adventurous dishes tried are horse meatballs, which are typical of the region. Sofia says she quite likes them. A bresaola and rocket panini has become her go-to lunch.

Catania is located in an ideal spot to see the sights located on the east coast of Sicily. Taormina, a hillside town boasting panoramic views, and the charming rocky island Isola Bella, are only 50 minutes away by train.

“I really enjoyed Taormina, it’s a beautiful part of the country. The colours in the streets are so vibrant and the views from the Teatro Greco are spectacular.”

Syracuse and Noto are also a short journey away from the city. Despite only having been here a few weeks, they have packed in a lot of sightseeing, but there’s still a long list of places to go. Evelyn really wants to visit Etna, Lipari and Palermo. Sofia recommends visiting i Faraglioni di Aci Trezza (the Cyclopean Isles) by sailboat, which is a volcanic formed archipelago. 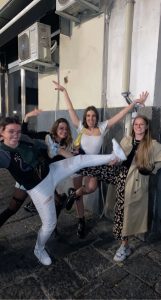 And the best bits of their internship? It seems the relaxed pace of living, the novelty of being in a new place, and how every sense is appealed to in day-to-day life on this island, are among the main ones. 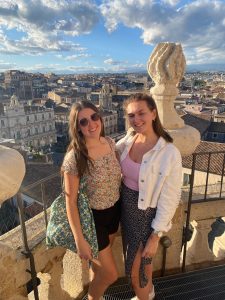 “My favourite part is that the moment I look out the window or step outside my front door, I am instantly charmed by the Sicilian aesthetic. I do not mean that Catania is the cleanest or the most peaceful city I have been to – on the contrary. Yet it has this undiminished energy – from the hustle and bustle of the main street to a sleepy warmness of small alleys.”